Awards 2021 Nomination. The project scope and specification included, saunas, steam rooms, induction hobs, air conditioning throughout, but with only a three phase 60-amp supply the electrical supply was continuously tripping.

In brief, we considered how we could help, and promptly realised that load monitoring was a quick fix; as such, we instructed the electrical contractor to replace the current meter to a specific ABB model, and we also provided a KNX interface.

We programmed the fix with a load limit to avoid any overloads and identified and agreed with the client which energy hungry services would be shut down, the air conditioning and the electric underfloor heating loads were the main culprits.

This simple yet practical KNX solution saved the client over £20,000 to upgrade the incoming supply.

The property benefits from a comprehensive home automation system throughout the entire building, as well as gate controls, external audio, and a high-grade security package.

As well as standard switch and dimming functionality, we extensively used scenes to combine multiple functions to optimise convenience and minimise the number of switches and button presses needed.

Master control of the lighting system is manageable through integrated smart devices such as iPhones and tablets, with essential functions such as presence simulation, secure mode, all on/off and scene setting at the touch of a single button.

The project benefits from automated curtains and blinds throughout, all of which are controlled via the same devices as lighting and heating.

The building controls system is controlled from 3 main control panel locations (to aid the electrical contractor and reduce cable runs) along with some smaller sub boards for various tasks all of which were built in-house by Intecho’s panel shop engineers, using a myriad of KNX devices. See Images

In addition to the comprehensive KNX solution we provide within our residential projects, our company is generally tasked with also providing numerous other technical solutions and must ensure they all act and operate as one.

Prior to ordering and signing off the Tacteo production, we produced a virtual switch sample for each location for client approval.

A unique aspect of this cinema space, is the use of a starscape ceiling, modelled on real observations of the night sky.

The 4K HDMI video distribution matrix services up to 8 sources to 8 rooms, with the primary sources being Sky TV, Apple TV, Blu-Ray and the Intecho Secure CCTV solution.

Security
It was a key requirement for the clients to be able to easily and quickly view the security cameras from anywhere within the house, and also whilst away.

ABB tacteo® KNX sensor
KNX sensors made of glass for the most demanding individual requirements.
The ABB tacteo® KNX Sensor is an individually configurable control element for intelligent building management of luxury hotels, public buildings and high class residential buildings. This makes each sensor unique in design and function. 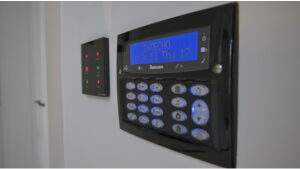